Richmond County Memorial Park was founded on June 1, 1951 by Joseph L. Sibley. This was Richmond County’s first perpetual care cemetery that offered families assurance of continuing care of roads and grounds. The beautiful 28-acre cemetery is located on US 74 east between Rockingham and Hamlet. The original office was located in the Steel building in downtown Rockingham. After two years, the office was moved to the Sibley’s Cannon towel store on US 1 north. Mr. Sibley felt that it would be better to have an office on the grounds. The office was constructed and completed in 1960 and still remains in the same building to this day.

The Memorial section holds a true masterpiece fountain built in 1952. The large fountain was imported from Italy. Due to damage from years of inclement weather, the top had to be replaced. The base of the fountain remains the original piece from Italy.

The Chimes Tower was dedicated on May 20, 1956 to the families of loved ones buried in the cemetery. The dedication ceremony had several ministers and a combined choir from several county churches. There were 500 people reported attending the dedication ceremony. The Singing Tower continues to play peaceful music.

The first Mausoleum was constructed in 1971 offering 160 crypts. Due to the wide acceptance of above ground burial, a addition was made to the existing structure. Thus making a climate controled chapel for entombment services.

A Veteran section was opened in 1999 for Veterans and their families.

The beautifully landscaped pond is the home of our beloved ducks. The pond and the ducks have been a legacy of the Park since 1951. Children and their parents enjoy visiting and feeding the ducks. This tradition has been handed down from generation to generation. 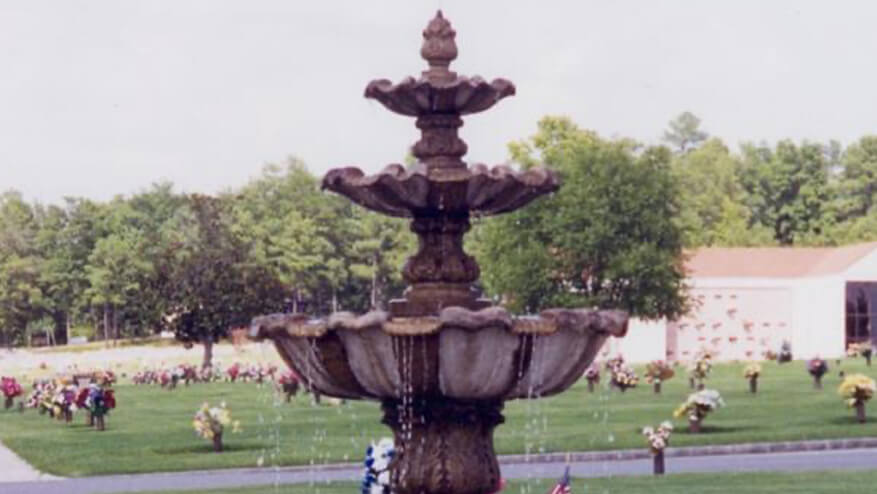 You are welcome to call us any time of the day, any day of the week, for immediate assistance. Or, visit our cemetery in person at your convenience.

About Us
Testimonials
Meet Our Staff
In Our Community
Our History